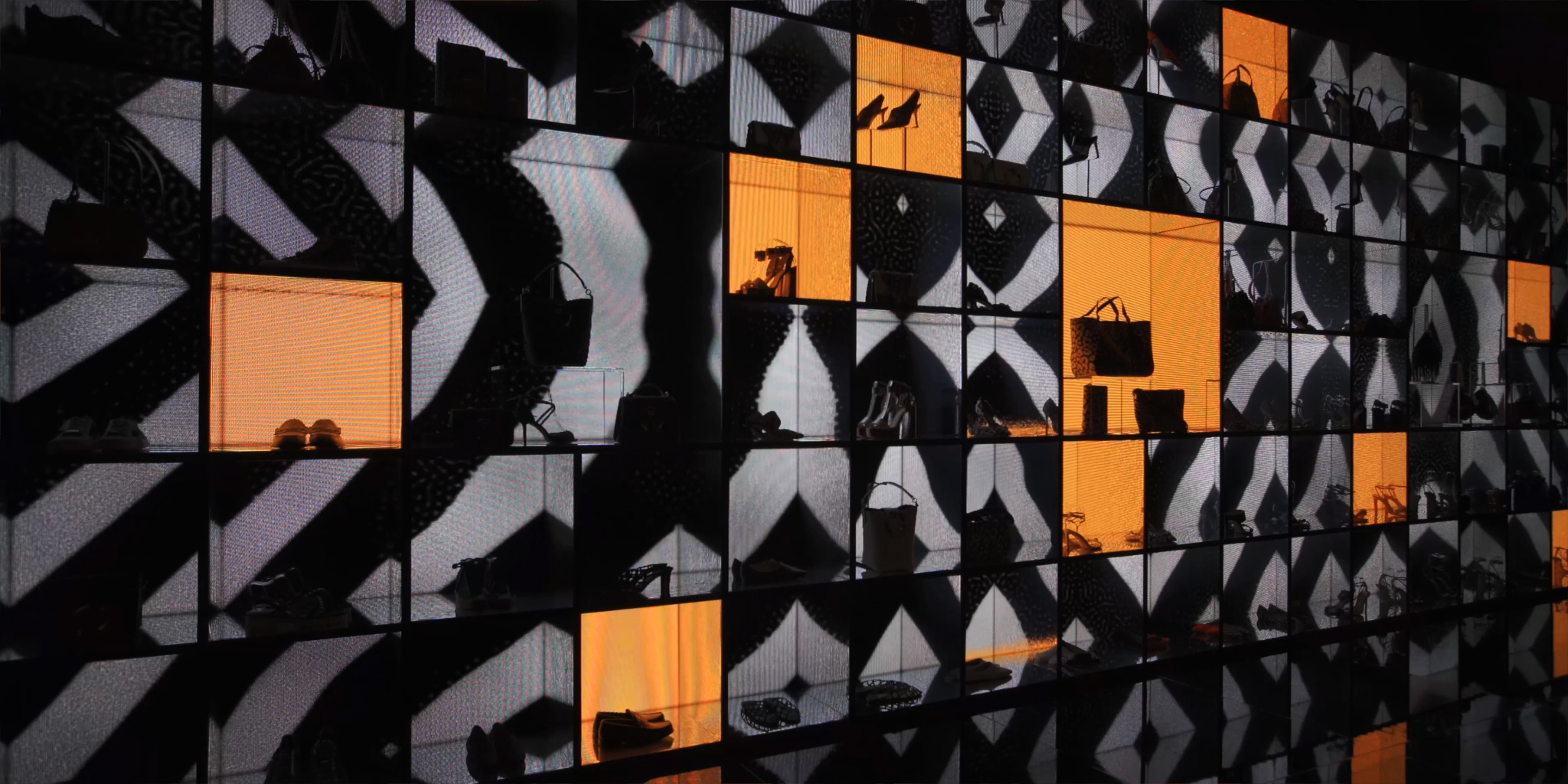 The installation, which ran for seven days in October to coincide with this year's Milan Fashion Week, was an immersive experience that enveloped the visitor through sound and a custom-built 3m high wall of evolving animated LEDs complete with mirror box cells.

For this new collection, Jimmy Choo’s creative director Sandra Choi drew inspiration from nature, suggesting “organic patterns that you are familiar with, but twisting and distorting them.” These new animal print iterations, for which the brand is renowned, are not strictly literal but instead, hybrids. “It’s twisting nature."

Our task, working closely with the visual designers and brand, was to embody this strong creative concept sonically, marrying the graphical animated visuals into a performative space of light, sound and movement that reveals the new SS20 collection through a landscape of pattern formation, exploring the interplay between particles, scale, shape, texture and transition through the soundtrack.

As with all of our sound design projects, we began to build and design our own sounds tailored to the project, not reach for existing presets. Every single sound we used in this project was recorded, designed and processed from the ground up by us.

We knew that the sounds needed to have a natural quality to them, that evolved and moved in a very free and unsystematic way. That's not to say we weren't able to use synthetic or electronic sources or processing (we did just that), but it needed to feel organic and unrestricted - unpredictable and imperfect, the way real sounds occur in nature. We also needed the soundtrack mood-wise to balance an abstract, ambiguous quality with this organic centre.

We also knew we would need audio that felt tactile to the ear - sounds with an inherent textural or material quality. So we recorded a plethora of sources to use as raw starting audio, ranging from coastal field recordings, vintage synths, boiling pans, small rubber toy flowers sporadically dropped on a tuned Kantele (a Finnish stringed zither) and rusty fairground props, amongst many others. Basically, anything that had some inherent movement or subtle morphing in the sound and wasn't too constant was a good starting point, knowing we could really push the sounds into new sonic territory later. We also created organically evolving textures using a series of different small materials, seeds or debris placed on top of a vertical subwoofer speaker. When the speaker was engaged with a programmed randomly undulating sine wave, this caused the materials to vibrate sympathetically. Using a combination of small condenser stereo microphones and contact mics, combined with specialised post-filtering, we were able to extract these interesting textures to use source material to sample and begin designing to the visuals.

Moving into the construction, processing and sync phase, we took these organic recordings and morphed and treated them, often pretty brutally, changing them into something hybridised, both familiar yet undefinable which were able to perform with to the animated visuals and automate on the fly. Here we wanted to delve deep into the idea of macros and micros - how tiny particles can create wider sounds, or how loud sounds can be inverted to feel tiny.

We used various processes for this including granular, spectral and waveshaping techniques, combined with convolution and spatialising effects, again for additional texture. We even managed to sneak a cheeky Shepherd Tone composition in to accompany the hypnotic falling zebra pattern around five minutes into the piece.

The installation played on a seven minute loop so the end of the soundtrack needed to marry the beginning exactly and seamlessly.

The work has received widespread acclaim for its innovative approach to a new collection and we're pleased to announce this has lead to further collaboration between The Futz Butler and the visual production company for a conceptual 20-minute art installation in China, in situ before Christmas.