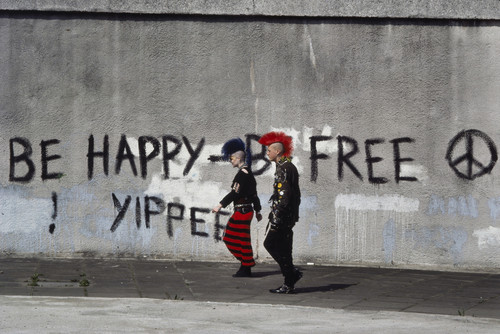 Can Youth Cultures Exist in the Digital Age?

"People put too much emphasis on scenes. Just because there happens to be a town with a few really good bands in it, I mean… big deal! It's happened all over the place. I don't understand this community patriotism that everyone's boasting about in Seattle. They all say 'we finally put Seattle on the map,' but it's like… what map? We had Jimi Hendrix! Heck!" -Kurt Cobain, 1991.

Despite what Cobain might think though when it comes to making music, great art has traditionally been bred in bubbles. Collectives come together and subcultures form, its people wearing their taste on their sleeves. Just look at the early 60s 'Swinging London' scene which spawned The Mods; the baby boomers of an affluent post-war Britain decked out in their finest Italian slim-fit suits. Perfect for the jazz clubs where they’d spend all their coffers. Or the King’s Road punk scene of the 70s, West London’s rebellious and unconventional hub of young and fashionable creatives. Viv Albertine of The Slits just popping in for a second-hand leather jacket at Malcolm McLaren’s Sex store.

British youth used music and fashion to state their tribe - but what exists of these subcultures today?

In the age of streaming, listening to and enjoying music has become rooted in our personal devices. Your hand-held access to a whole virtual discography that transcends musical genres to create perfectly packed moments with relatable titles, (Weekend Traffic Jam, Going ‘Out Out’ with the Girls) all carefully crafted into an easily accessible pre-populated playlist. Music is consumed less in person - in the there and then, and more digitally - at arm's length.

With more and more live venues closing up and down the country, is it surprising that how we musically identify is becoming a more virtual experience rather than a local focal point to congregate? Only last year, The Guardian reported that the UK’s first live music census found “a third of Britain’s small venues outside of London are fighting to survive in the face of high business rates and noise restrictions”. Faced with the prospect of closure, the Drowned in Sound community successfully crowdsourced over £5k to keep the music-based forums running on new servers. 16 years from its inception, the digital fanzine proves that people all over the globe are willing to invest in this idea of a connected community when it comes to music. Plus, you can just chuck on an old hoodie for that meet up, no designer Westwood necessary.

Even the former hangouts themselves have shifted with the times. The King’s Road scene of the 70s has gone from punk to pedestrian - a place where you’re more likely to find a Michelin starred restaurant in an old fire-house than you are rubberwear and PVC boots. For most people, it’s probably just something they heard on the telly from those kids in Made in Chelsea. According to musician and long-time frontman of The Talking Heads, David Byrne, New York’s art scene is heading a similar way. “We come to New York for the possibility of interaction and inspiration.  People can barely afford to live here, the resources [knowledge and creativity] that keep the city vibrant are being eliminated. This city doesn’t make things anymore”.

It’s the conundrum of modern-day music displacement. Much like Cobain’s concerns, we’re no longer putting places on the map because a lot of our music creation is now crafted in virtual spaces, with the possibility of being able to share this to a global audience in a few clicks. Perhaps, we’ve all turned a little bit more inward. A little more self-obsessed. More likely to construct the perfect online identity through an Instagram filter and lay-down than we are to make an outward show with safety pins and hairspray. You can't have a scene if everyone's in it

It's fair to say that scenes, by their very nature, have always had an element of exclusivity. Just look at the luxury of some of those British tribes; West End designer store hangouts for the King's Road crew or the arty middle class of the Britpop era. While it's heartbreaking to see national institutions facing closure, without an area or venue as an anchor point, scenes are no longer as fixed to fashion or locations as they used to be.

If scenes begin to emerge these days, they don’t stay local for long as their digital reach goes far beyond the manor. They trend online and become bought into or appropriated by the masses and diluted designed by committee - a fragment of what it once was. The gestation period is cut short and all before the scene has really reached its cultural epoch. Just look at how many brands jumped onto the South London grime scene in its post-Brits blaze. Stroll into any H&M store and you could pick up a T-Shirt emblazoned with 'GRIME' from the casual section or catch East London native Ghetts popping up in your Insta feed promo-ing the latest Clarks shoes. Nothing stays secret anymore, so the pride of those who formed it similarly dissipates into the ether. Or into the hands of unknowing European shoppers.

Today’s streaming platforms only require an ethernet cable and no kind of pre-purchased garbs to get involved. There’s a fluidity to subcultures now that means more people are accessing and listening to artists and bands that they otherwise have been priced out from, or certainly sneered at for attempting to interact with. Subcultures do exist in the millennia but now it all happens in hyperlase. They catch people's imagination all too quickly, get appropriated by mainstream culture then die away as #sellouts. Or worse still commandeered by some other faction, as happened with right-wing extremists with the Skinhead movement of the early 70s. Maybe Cobain had it right all along. It’s so much bigger than a pin on a map. Nowadays, scenes can form between a Kurdish bedroom beatmaker in Amsterdam and a New York spoken word artist with time for a new track to be up on Bandcamp within a few days.

And that’s something, at least, we can be totally on board with.